Sapana Roka Magar is a Nepalese crematorium worker, who was selected as the 100 most influential women of 2020 by BBC. She is the 18-year-old girl from Myagdi district has been doing an important job, one that is not just uncommon to a teenager, but hardly easy. She is involved in the cremation of abandoned bodies from the street or mortuaries and arranges for them to be taken to hospital for post-mortem examinations. 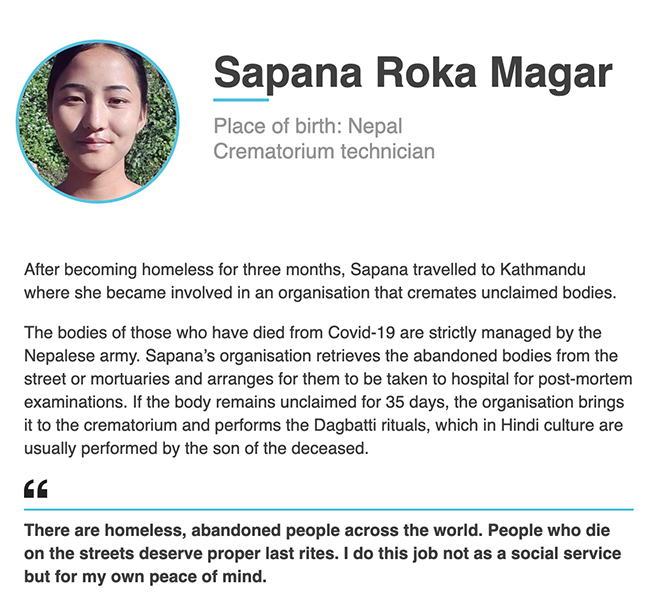 Sapana Roka Magar is from Myagdi District of Nepal. She was born on 10 February 2002 as the youngest child of Jit Prasad Roka Magar (father) and Nanu Roka Magar (mother). In the streets, she became acquainted with the Action for social change, an NGO, and began to work with them from where she operates the cremation and other social activities now. She is also involved in feeding the homeless during the COVID-19 lockdown in Kathmandu. 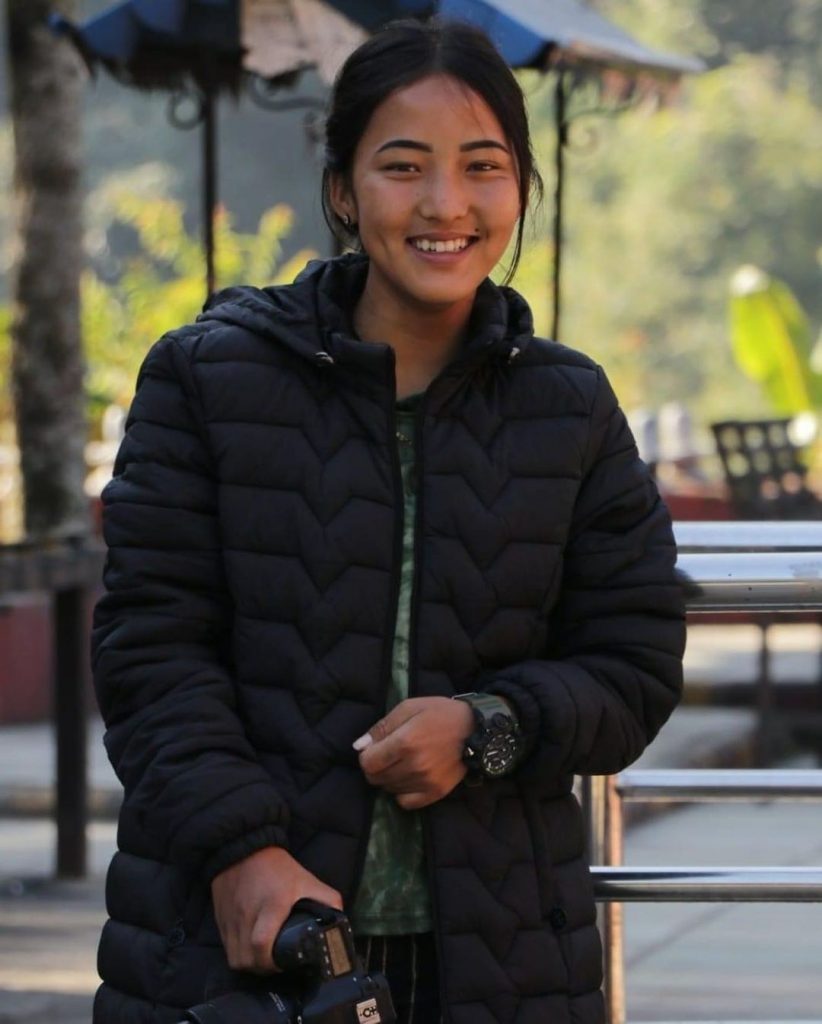 An 18-year-old girl who provides Hindu funeral rites for unclaimed bodies was once lost, alone, and homeless. Her early days had not been that great.

She had a humble beginning in Baranja. She was studious. She topped her district in her SLC. But, her life changed when she left for Beni for her higher studies.

She met a guy on Facebook. At the age of 16 on which she could not differentiate between right and wrong, she fell in love with the boy and left Beni for Butwal. In Butwal, she got married to the guy which did not last for long. After being apart from her husband she was ashamed to return her home. Then she started to live on the streets which were the only place she could go to. She slept on the streets and slept a lot of nights without eating.

She was so frustrated living on the streets that she attended some tries to kill herself. She was homesick. After living three months on the streets she went back home to her parents. She had become a laughing stock in the village. But her parents, disregarding what the society would say, took her in.

Everyone was talking behind her back about how she had defamed her family. She wanted to make things right. She took that as a challenge. So she joined Ratna Higher Secondary School. But, her parents told her that she would be better off away from the village and sent her to Pokhara. Then she passed her 12th-grade exams at Galaxy International College in Pokhara. She also learnt the Japanese language as she felt leaving Nepal was the right thing to do.

After completing her 12th grade she came to Kathmandu. There she met Salina’s(sapana’s friend) father Binaya Jung Basnet who gave her refuge in his home. At Binaya Jung’s home, she learnt about his organisation, Action for Social Change. When she found out about how the organisation performed the final rites of unattended dead bodies, she was curious. She went to the Tribhuvan University Teaching Hospital morgue with Binaya Jung to experience what it would be like. At first, she was scared, the room was dark and smelly. Looking at the unattended bodies gave her chills.

But she was so eager to do this job that she stuck to her early decision to perform the final rites for unattended dead bodies. The first unattended body she cremated was that of a girl her age. That girl’s lifeless body reminded her of herself which gave her more motivation to this social work. Now, she has performed the final rites of over 100 bodies.

She had become an inspiration to youth and pride for our nation. She was included in BBC 100 Women 2020 as one of the most influential and inspiring women across the world for the work she has been doing in Kathmandu.

Miss Nepal 2022 has concluded successfully and we have new magnificent crown holders this year as well. Priyanka Rani Joshi...

The developing subculture of subject matter cafes serving beverages and mild snacks at the facet has grown to become out...

If you're travelling to Nepal or making plans to have a dinner date together along with your own circle of...

Surakhsya Panta is one of the most versatile actresses in the Nepali Film Industry. In a community of hundreds of...

This summer season, be within the temper for a little of everything, from simple, sheer shade to over-the-pinnacle nail artwork....